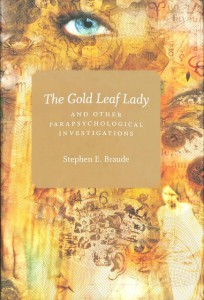 Chapter: Preliminaries
Page 1: „I was seated across a table from a woman, no more than three feet away. And while we were talking, a small piece of gold-colored foil appeared suddenly on her face. I knew that her hands were nowhere near her face when this happened. In fact, I was certain they were in full view on the table the entire time. I knew also that if her husband, seated next to her, had places the material on her face, I would have seen it clearly. But nobody´s hands had been anywhere near her face. So I knew that the material hadn´t been placed there; it appeared there, evidently without normal assistance.“

Chapter: Observing the Foil Page 10: „Foil appeared in plain view only once in my sessions with Katie. But whether or not it manifested before everyone´s eyes, observers would eventually ask Katie to lift her shirt, to see whether there had been some undercover activity during their conversation.“

Page 12: „When Katie arrived, she walked up to my wife and they embraced. At that time, no foil was on Katie´s face, and during the embrace her hands were nowhere near her face. Katie´s left hand remained at her side, holding her purse, and her right hand was on my wife´s shoulder. But when they stepped back from the embrace, a small piece of foil, perhaps an eighth-inch square, was on Katie´s left cheek. Of course, my wife observed this at close range, and I observed it at a distance of four or five feet. It was clear that no foil was on Katie´s face before she embraces my wife, and it was equally clear that Katie´s hand were in no position during the embrace to place any foil on her cheek. Immediately thereafter, we walked inside to Bert´s back room for the planned videotaped session. My wife walked next to Katie on her right and I walked behind them. From the time we entered Bert´s office to the time we entered the back room, Katie´s arms and hands were in clear view at her side, with her left hand still holding her purse. So Katie had no opportunity to touch her face without being observed, and she clearly made no effort to touch her face. But when we arrived in the back room, the piece of foil on Katie´s cheek had doubled in size.“