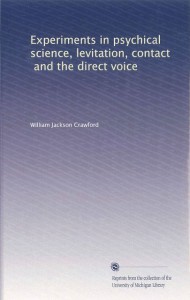 Chapter: Introductory
Page 5: “I have seen hundreds of levitations under all conditions; standard levitations such as that mentioned above, abnormal levitations (such as where a stool rose four feet into the air and moved gently up and down for several minutes while we all examined it closely and while the medium was seated on a weighing machine) and freak levitations (such as where the table, being levitated, rocked in the air just like a small boat tossed about on a choppy sea). I have seen the table turn completely round in the air, and I have seen it levitated upside down and sideways.”

Book: Sketch of parapsychology and parapsychophysics 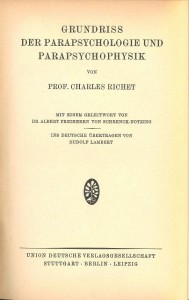 Chapter: Crawford´s telekinetic experiments with Miß Kathleen Goligher
Page 332: „The movements of the table took place, without the medium or something different one stood with the table in contact. I saw hundreds this table levitations. Sometimes also a chair with all four feet rose and swung several minutes in air. “

Page 118: „The medium (Kathleen Goligher) sits on its chair – the circle amounts to approximately 1.50 m in the diameter – chain – table in the center – red light. In few seconds of knocking tones on the ground, near the medium, which become louder soon up to hammer blows and in two floors of the house as well as outside of the same are heard. Floor and chairs start trembling. Other noises, footsteps, blow-out of a ball, trotting a horse are noticed. After one quarter of an hour stops knocking, the table – not in contact with the circle – makes quiet movements on the ground, rises on two feet, then he rises into air, there some minutes floating. “