Book: The Seer of Prevorst 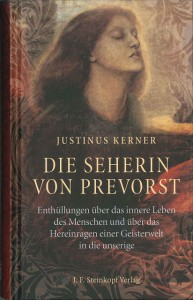 Chapter: Emergence of the magnetic state
Page 33: “You saw various items, for example very often the silver spoon which was removed and from her hand in placed on the plate quite a distance from her, without fallen like being thrown. They moved very slowly through the air as if carried by an invisible hand to where they belonged.”

Chapter: Increased suffering and deeper magnetic Condition
Page 38: “This time it happened that the amulet, that a particular man had sent her, moved as if walking over her head and over her chest and blanket like a living being in front of those present. It went moving forward so it had to caught and brought back. For these incredible phenomena speak several very respectable witnesses.”

Chapter: Interior life – intellectual seeing
Page 68: “It has already been mentioned before, that objects whose contact was  harmful to her, were taken away by an invisible hand and placed on another spot by freely moving through the air.”

Chapter: Facts to Weinsberg
Page 296: “Mrs. Hauffe was very quiet, but as I looked up towards her, in this very moment her boots extracted out of the very calmly lying feet. As if by an invisible hand pulled through the air of her sister´s room, who was just looking out of the window, and as she turned around the boots stopped abruptly before her and landed quietly on the floor.”