Book: Possession and Exorcism – My Life 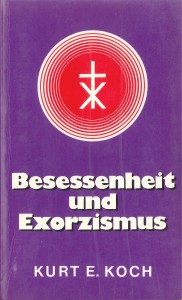 Chapter: Materializations
Page 145: “Her body exuded many small stones, namely through the skin, not through the body orifices.”

Page 147: “In a further case from a European country, I was once again called to help. A prayer circle, whose leader I met, took care of a possessed woman, from whose body exuded several kilograms of iron parts. These iron parts were shown to me. I requested that the prayer circle should not keep these items but have them destroyed. If nails or needles come out of the mouth it can be assumed, that they were previously swallowed. But this theory fails, when nails escape from the temples. In one case of a possessed man, long nails came through the skin of the upper arm and through the skin of the back.”

Page 152: “In the fourth phase showed materializations. From the body of the possessed, from different body areas escaped small stones, nails, needles, small scissors and other things. Is it not strange, that these materializations are on all continents and show the same characteristics? Just compare the reports that are given in this book.”